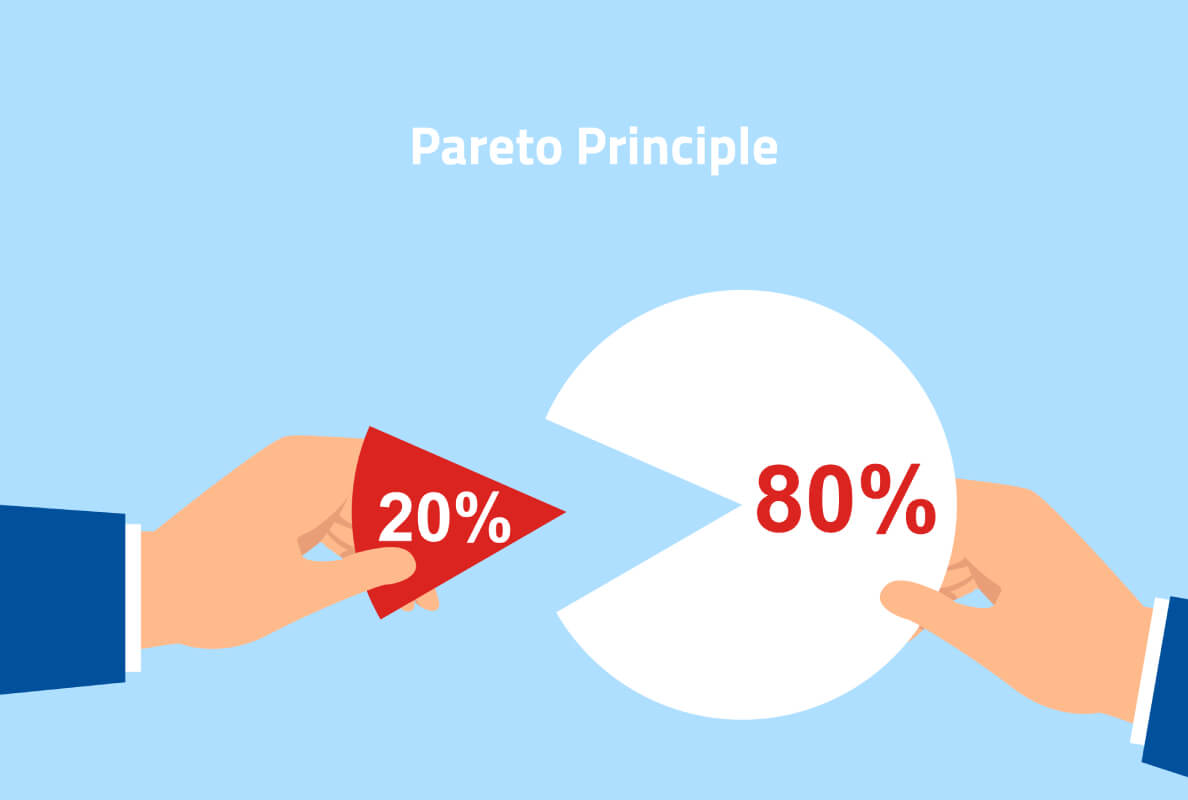 Different problems occur over and over again on the shopfloor – but which ones should be fixed first or where does it make sense to start?

The correct prioritization of tasks is crucial here. The Pareto analysis can be a helpful support in making the right decision.

The Pareto principle was named after the Italian national economist Vilfredo Pareto. It says that about 80% of the effects are caused by about 20% of the potential causes. A small part of the causes leads to a large part of the effects. A Pareto analysis, also known as the 80/20 rule, is used to identify the most common causes for an impact to occur and then to optimize them at best.

The Pareto chart on the shopfloor

The Pareto chart is applied to identify frequently occurring processes or product defects. In the long-term, this saves costs, waste and time – which results in a competitive advantage over other companies.

Process of the pareto analysis

To get the most out of the pareto analysis, it should be done in the following steps.

1. Definition of the problem

First, the problem should be defined, which should be solved with the help of the pareto analysis. Thereby, the pareto analysis supports not only the identification and analysis of errors or production bottlenecks, but also the optimization of the order quantity and the inventory, as well as the adjustment and identification of the production costs.

The scrap statistics of the last year should be evaluated with the help of the pareto analysis. This should help to identify the most common errors on the shopfloor and to avoid them in the future. The corresponding metric could be, for example, the number of rejected products.

In order to be able to carry out the analysis, all the necessary data must be collected. It is important that the data are current and representative. This presents a major challenge for many companies.

By using industry software with smart wearables like the aucobo system, all relevant data are available in a few seconds. The analysis period can be customized and it is ensured that homogeneous data are compared. The important thing here is that all the data can be recorded without requiring a lot of time from the employees and that it happens on the side and (semi-)automatically. The employees can thus use their working time more efficiently and the potential for errors in the analysis is minimized.

The smartwatch and the aucobo system record and document relevant data from each shift, such as machine failures, problems and machine errors. In contrast to the conventional method of documentation on paper, the use of digital tools ensures that no data is lost and is constantly up-to-date. If you analyze the recorded data for the machines on the shopfloor, you will find, for example, that machine 3, machine 7 and machine 14 are causing the most errors. These errors ultimately lead to the rejection of the end product.

3. Determination of the effects

However, the frequency of occurrence of an error alone does not provide sufficient information about the importance of the error. For this reason, the costs associated with the error per category should also be included. In this way, it is possible to determine the total costs incurred for each category of error. Subsequently, the total costs of each category can be ranked.

By using industrial smartwatches, correlations between the individual analyses of the affected groups of people and machines can be identified. This makes it easier to identify which employees and machines need to be included in the appropriately developed measures.

With the help of cost rates, the total costs of the individual error categories are calculated and then ranked accordingly. This ranking shows accordingly in which areas of the company the most money is wasted – for example, through wasted time or a high reject rate. The use of smart wearables can counteract these two types of waste. For example, when a machine is down or a fault has occurred, the employee gets a direct notification on his watch. This means he no longer has to stand right next to his machines and watch them constantly, but can work on something else during that time. He can therefore organize his working time more efficiently than without an industrial smartwatch.

4. Creation of the pareto diagram

In the final step, a pareto diagram is created from the data obtained. The X-axis contains the relevant error categories, the Y-axis the percentages of the total costs caused in each case. The percentages are entered in descending order in the diagram and subsequently cumulated in each case.

With the help of the pareto diagram, measures can then be worked out and taken to minimize sources of error in the company and thereby reduce costs at the same time. By using wearables, the success of the implemented measures can be monitored and adjusted if necessary.

If the pareto analysis shows that rejects are one of the biggest problems in the company, a continuous quality check from the beginning of the value chain could be a measure. Wearables can also contribute to optimization here. Through direct notifications to an industrial smartwatch, employees can be reminded of the quality checks that need to be carried out and confirm them at the push of a button once they have been completed. Keeping up with the respective process steps can also reduce waste. Smart wearables can be used to guide employees through the process step by step. The individual options and functions can be individually adapted to the needs of the company and implemented immediately through the workflow editor.

The benefits of the pareto principle

The pareto analysis enables companies to obtain the relevant causes and effects of problems on the shopfloor within a very short time and at very low costs. The analysis can be carried out without much prior knowledge and can be completed quickly and easily due to the continuously recorded data from the smartwatches. There is hardly no time lost between the identification of the problem and the approach to problem solving, since the further identification of the problems and the start of the first problem solving can be carried out simultaneously.